This article is excerpted from the upcoming book SQL Server 2008 Administration in Action by Rod Colledge and published by Manning Publications. It
examines the objectives and implications of server consolidation and
virtualization. For the book’s table of contents, Author Forum, and other
resources, go to http://manning.com/colledge/.

The arrival of personal computer networks marked a shift away
from big iron mainframes and dumb terminals to a
decentralized processing model comprised of many (relatively cheap) servers and
lots of personal computers. In many ways, we’ve come full circle, with the
shift back to a centralized model of storage area networks and virtualized
servers running on fewer, more powerful servers.

In recent years, the shift towards server consolidation and
virtualization has gained pace, and in the years ahead, the idea of a
dedicated, non virtualized server may seem quite
odd. From a SQL Server perspective, this has a number of important
ramifications. Before we look at the considerations and differences, let’s
begin by taking a look at the goals of consolidation and virtualization.

The plummeting cost and increased power of today’s server
components has moved the real cost of modern computing from hardware to people,
processes, power and space. As such, in a never ending quest to minimize
operating costs, businesses have embraced consolidation and virtualization
techniques, the major goals of which are to avoid server sprawl and minimize
costs.

In general terms, Server Sprawl is
used to describe the uncontrolled growth of servers throughout the enterprise,
making administration very difficult. SQL Server sprawl is a particularly nasty
problem; consider an example of a SQL Server instance running on a PC sitting
under someone’s desk, installed by a DBA who is no longer with the organization
and who never documented its existence. Does this instance need backing up?
Does it contain sensitive data? Do you even know that it exists?

Given the ease with which new SQL Server installations can be
deployed, and the power of today’s commodity PCs, SQL Server sprawl is an all
too common problem. Whilst there are tools for discovering the presence of SQL
Server instances, and new SQL Server features, such as Policy Based Management
that make administration much simpler, the sprawl issue remains a significant
problem, and one of the prime reasons for consolidation and virtualization
projects.

The Microsoft Assessment and Planning
Toolkit Solution Accelerator is an excellent (free) tool that can be
used in assessing existing infrastructure. From a SQL Server perspective, one
of the great aspects of this tool is its ability to discover
installed SQL Servers on the network, handy for planning upgrades and arresting
out of control sprawl situations

Each physical server consumes space and power, both of which are
the natural enemies of a data centre. Once full, expanding or building a new
data center is a very costly exercise, and one that makes little sense if the
existing servers are running at 50 % utilization.

As computing power increases and virtualization software
improves, the march towards fewer, more powerful servers hosting multiple
virtual servers and/or more database instances is an industry trend that shows
no sign of stopping. The real question for a DBA is often how
to consolidate/virtualize rather that whether to consolidate/virtualize.
In answering that question, let’s look at each technique in turn, beginning
with consolidation. 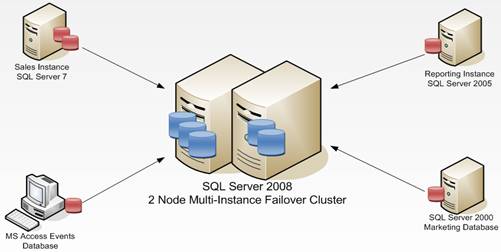 SQL Server’s support of NUMA hardware, the ability to install
multiple instances and cap each one’s memory & CPU, and the introduction of
Resource Governor in SQL Server 2008 all contribute to the ability to
effectively consolidate a large number of databases and/or database instances
on the one server.

Just as creating a new virtual server is very simple, installing
a new SQL Server instance on an existing server is also simple, as is migrating
a database from one instance to another. But just because these tasks are
simple does not mean they should be done without thought and planning. Let’s
take a look at a number of important consolidation considerations for SQL
Server.

From a consolidation perspective, having baseline data at hand
allows for sensible decisions to be made on the placement of instances. For
example, consolidating a number of servers, each of which are bottlenecking on
CPU, on a single CPU core box does not make any sense. In contrast,
consolidating servers that consume very little resources does make sense. Accurate
baseline data is a crucial component in making the right choices as to which
servers and/or databases are consolidated together.

When examining typical usage as part of a consolidation process,
care should be taken to ensure batch processes are considered. For example, 2
SQL Server instances may co-exist on the one server perfectly well until the
end of the month, at which point they both run a large end-of-month batch
process, potentially causing each process to exceed the required execution
window.

Consolidation brings with it an even mix of benefits and
challenges. We’ve just covered the importance of consolidating complementary
instances from a performance perspective. Equally important is considering a
number of other administration aspects:

Apart from the ability to affinitize CPUs and cap memory usage,
choosing to install multiple instances has one distinct advantage over placing
multiple databases in the one instance; each instance has its own TempDB
database. Depending on the databases being consolidated, installing multiple
instances allows more than one TempDB database to be available, enabling the
placement of databases with heavy tempdb requirements in the appropriate
instance.

Let’s turn our attention now to Virtualization; a specialized form
of consolidation.

Unlike the SQL Server instance/database consolidation techniques
we’ve outlined above, virtualization occurs at a lower level by enabling a
single server to be logically carved up into multiple virtual
machines, or guests, each of which shares the
physical server’s hardware resources but is otherwise separate with their own
operating system and applications.

Virtualization platforms, also known as Hypervisors,
are classified as either Type 1 or Type 2. Type 1 Hypervisors, commonly
referred to as Native or Bare-Metal
hypervisors,
run directly on top of the server’s hardware. VMware’s ESX
Server and Microsoft’s Hyper-V are recent
examples of Type 1 Hypervisors, an example of which is shown in figure 2. Figure 2: Hypervisors such as Microsoft’s Hyper-V are
used to virtualize multiple guest servers. Guests share the host’s resources
whilst appearing on the network as normal servers

Type 2 Hypervisors such as VMWare Workstation and Microsoft’s
Virtual Server, run within an existing operating system. For example, a laptop
running Windows Vista, could have VMware Workstation installed in order to host
one or more guest virtual machines running various operating systems such as
Windows Server 2008 or Novell SUSE Linux.

Let’s take a look at some of the pros and cons of virtualization
as compared with the consolidation techniques covered above.

Virtualization offers many unique advantages including the
following:

Despite these clear advantages, there are a number of issues for
consideration before virtualizing SQL Server environments.

Arguably the single biggest issue for consideration when
virtualizing SQL Server is that of support,
particularly for mission critical production systems. It’s not uncommon to hear
of organizations with virtualized SQL Server environments having difficulty
during support incidents due to the presence of a virtualization platform, with
a common request during such incidents to reproduce the problem in a non
virtualized environment. Such a request is usually unrealistic when dealing
with a critical 24×7 production SQL Server environment.

Microsoft recently announced that both SQL Server 2005 and
2008 will be officially supported in Hyper-V environments, as well as those
certified through the Server Virtualization Validation
Program (SVVP). Links and further details available at
http://www.sqlCrunch.com/server

Other considerations for SQL Server virtualization include:

Virtualization and Consolidation techniques are here to
stay; it’s vitally important that the pros, cons, and considerations of each
technique are well understood.