In today’s agile world, development teams must respond quickly to ever changing business needs. The traditional practice is to use a task management system, such as JiRA, TeamForge, TFS, RTC, or others. These systems manage the business requirements and break them into tasks for the developer who makes the change, both for the application code as well as the database code.

Many organizations implement Continuous Delivery processes, allowing the IT department to support the high pace required by the organization. The best practice is to have the entire process of build, test and deploy – automated. This means that once a developer checks-in the new code to the source control, this code can be deployed to production.

As a solution, many organizations have a weekly, bi-weekly or monthly committee meeting to decide which database changes – based on the tasks from the task management system – are approved for deployment, and then manually generate the delta script specifically for the approved tasks.

This method presents a new challenge to the organization; how to build (compile) the application – and include changes related to the approved tasks for the database – while at the same time ignoring changes that were checked-in into the source control repository (but belong to tasks/user stories that were not approved).

The leading file-based source control tools today have solved this challenge by providing several methods such as branching the environment and integrating with the task management system. They also provide a method to extract the files based on the selected tasks.

This may sound trivial, but there is a major technology which is part of the application, and the standard methods of file-based source control don’t apply to it. This of course would be the database!

Here are some of the reasons why source control does not work for the database:

Let’s delve a little deeper into the reasons for these challenges.

There are several approaches to managing database changes:

The solution is to integrate development and deployment into a single process known as Database Enforced Change Management. This involves ensuring that a source control repository is the single source of truth, by using an enforcement change policy that guarantees every change to the database objects is documented. The above flow should be combined with a sophisticated impact analysis which uses baseline aware analysis algorithms and is aware of the nature of the change, and can ignore changes which were done in a different branch, parallel environment or that conflict with a critical fix.

This process works very well for native code (Java, C#, C++, etc.) but it is not implemented for the database code (table structure, procedures, lookup content, and so on).

The reason for this is that organizations don’t want changes to be made in the deployed database in the same way as their code. They want to control which changes in the database will be released and when. Saving just the object definition in the Check-In is not enough. Information regarding the reason for the change (task, user story, requirement, epic, etc.) is as critical as saving the object definition.

We need to think differently in order to meet the demands of the database.

The concept is to deploy database changes between environments by keeping the reason for the change (task) as part of the metadata of the check-in. Using simple set theory, we can always add a new set to the one we promoted previously with each set representing the changes for a relevant task. Now there is only a need to promote changes that are related to Task1 and Task3. 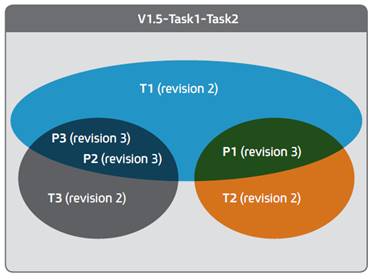 The challenge now is to understand which objects and which revision should be considered when generating the delta script for Task1 & Task3. Collecting changes made for Task1 returns the following: Collecting changes made for Taks3 returns the following:

This requires (1) to rely on our source control as a single source of truth, (2) having the reason (task, user-story, epic, requirement, etc.) included in the metadata of the check-in (3) and that the analysis that generates the delta script should utilize the previous requirements in order to use the correct object definition from the source control – based on the selected tasks and previous deployments.

With this practice, development teams now have the ability to decide on tasks, based on business needs rather than on their technology dependency. They can now respond quickly to the ever changing business requirements in today’s agile world.

Database enforced change management means that development flexibility can be drastically increased, allowing for mid-course changes and corrections. Huge resources can be saved by automatically developing, testing and responding to scope changes for database upgrades and rollback scripts.

With the application code and the database code using the same method across the entire lifecycle and by using this system of selecting changes based on tasks, only approved code changes are promoted to production.