Ok, this truly is a ‘basics’ article. I’ve never been fond of the TreeView & ListView because the library file that exposes these controls, MSComCtl.ocx, always seemed to behave a little quirky. It was as if I could never be sure which version of the controls any given user would have on their computer and while the controls worked fine for me, users constantly experienced issues. So, I gave up on them … but maybe too soon.

Recently I’ve been working with the TreeView & ListView controls on some utilities we use in-house, and the problems I remember from my Access 97 days have not manifest themselves. I’m sure I’ll get email from developers who never encountered problems with these controls in Access 97 applications, but alas, that was my experience. But all that’s water under the bridge, and I am finally, after all these years, embracing this family of controls.

However, as a newcomer to the TreeView & ListView control, I have no depth of wisdom to impart. There are resources a plenty on the web that describe advanced techniques. This article will focus on getting started. Click here to download the sample code.

The first step is critical. You need to inform your Access application that you plan to use these controls, and point it to the Microsoft Library wherein they are contained. On all the Access installs where I develop, that ends up being in the Windows\System32 directory:

To add the reference, you need to open any VBA code module (the keystroke Ctl+G will get you there), and select References from the Tools menu. With most libraries, you simply need to scan the list for the one you want. You’re looking for the Microsoft Windows Common Controls library, but if your install is like mine, you won’t find it in the list. You’re going to have to browse to it, thus the need for the path given above. The process is illustrated in the screen shot below. Find the file, click Open and then click OK on the References dialog, and we’re ready to code. 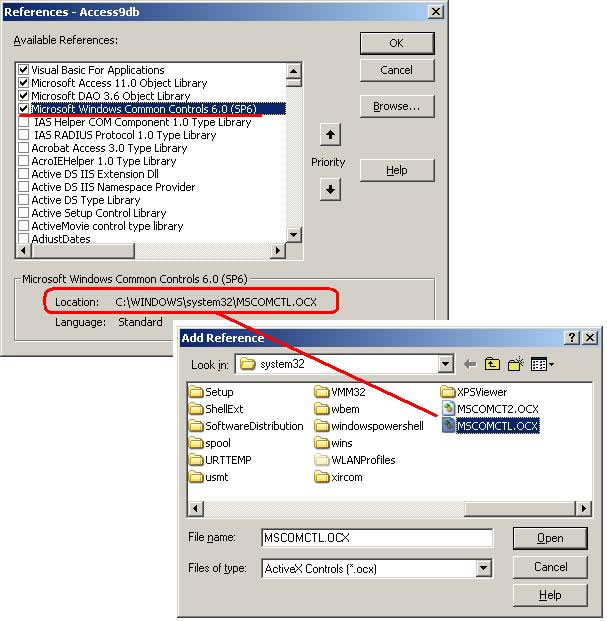 The first step, and not a trivial one, is to get the control(s) on your form. There are two ways to do this. You can click on the “More Controls” button on the ToolBox toolbar, which will pop up a scrollable list of available ActiveX controls. Scan the list for Microsoft TreeView Control or Microsoft ListView Control and select it. Alternatively, you can choose ActiveX Control from the Insert menu and work with a smaller, more manageable pick list which gives you feedback about the control you are about to plunk on your form. Either way, you end up with a special object that has, as we shall see, special properties. 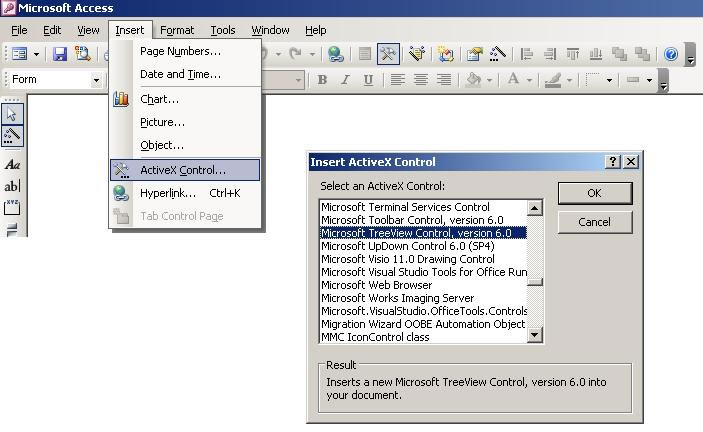 Setting these properties changes the way the control appears and behaves. The ListView control exposes additional tabs to control things like the widths for column headers, sorting and the like. I had a hard time finding help, as it did not seem to be installed. A search of the newsgroups revealed the files I needed, and where to get them, but even then, it didn’t seem to run on my machine. Here’s a summary of what I found. The version 5 files are included in the download, but here’s a site where you can download the latest files, if you can get them to work on your computer:

There’s so much more that could be written here … and so much more has. Remember, this article is just to get you started. There are many examples on the web, and MSDN even has some helpful articles. For now, having placed the controls on a form, let’s look at one example of using these controls.

Below is the entire code listing for the demo application. The only trick to it is the adding of what are called ‘Nodes’. Node keys must be unique, and from my experience, must be perceived by the control as being non-numeric. Accordingly, I’ve attached the bar character (|) to the ID numbers to ensure they appear to be text values.

The other thing to note in the code is how string values are used for comparison to determine when it’s time to create a new node. As we begin looping through the recordset, the previous value for strPName (publisher name) is compared with the current recordset value. If it’s different, a new node is created and the variables are updated. The same process is followed for the Store Node and the Author Node. After that, it’s just looping.

You won’t find any special events for the control, but they do exist. Accordingly, you simply have to code for them, as with this event procedure:

The same is true for the ItemCheck event of the ListView control. However, the ListView control differs from the TreeView in that there are no nodes … just items, which are added through the ListItems.Add method. The best way to learn about how this works is to download the demo app, and step through the code. That’s pretty much what I had to do my first time.

‘ Given we have a non-zero ID, load the listview control
If strAu_Id <> “” Then
Call LoadMyListView(strAu_Id)
End If

There’s a lot to these controls, way more than what’s been described here. Below are a couple of MSDN references, and there are more to be had. The newsgroups were a great source for additional code samples and for suggestions on how to overcome errors in describing unique Node Keys, which seems to be the most common pitfall of the TreeView control.

No, I’ll never be a Common Control guru, but such developers exist. I work with one such expert, and he has shown me an app that programmatically changes icons, column headers, sort orders and much, much more. I’m in awe of what can be accomplished by the TreeView and ListView controls. It may be just the tool you need to finish your application, but be advised, the learning curve is anything but trivial.

Danny Lesandrini
Danny J. Lesandrini currently works as the IT Director for Pharmatech Oncology Inc. at http://www.pharmatechoncology.com/. He holds Microsoft Certifications in Access, Visual Basic and SQL Server and has been programming with Microsoft development tools since 1995.
Previous articleThe real difference between SQL Server and Oracle
Next articleOracle Housekeeping Script