In data synchronization environments, there is a transport mechanism to facilitate data transfer from the remote database to the consolidated database and vice-versa.

To create a synchronization system without a single point of failure, redundancy must be built in to each component of the system.

As corporations move towards always available data and occasionally connected applications, it is increasingly important to ensure enterprise database management systems remain functional and online in 24/7 environments. Database mirroring is an availability and disaster-recovery technology for database management systems to ensure data and data synchronization is available anytime. 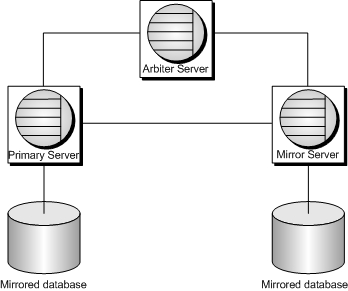 Database mirroring builds high availability into the consolidated database. The dotted line in figure 4 represents the failover of the synchronization server if a role switch occurs in the database mirroring environment. 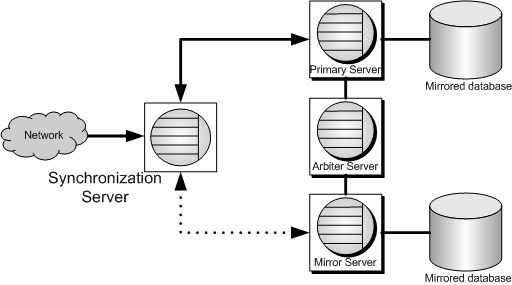 This can be accomplished with xp_cmdshell. The xp_cmdshell system procedure allows the execution of operating system commands directly to the Windows command shell via SQL code. This does not require knowing which machine is designated as the primary server, because:

Here is an example of an external procedure to initiate synchronization:

The xp_cmdshell process can be initiated through an application connection or via system process on the database server machine.

In a database mirroring system, at least two machines must fail before the entire synchronization system fails. However, in the above solution, if the machine running the synchronization client fails then synchronization fails. To avoid this single point of failure an implementation using an external procedure called via a scheduled event that is stored in the database on both database servers will be sufficient. This prevents the need for an external application to initiate data synchronization. Scheduled events are a feature of Sybase iAnywhere’s SQL Anywhere that allows logic to be triggered based on a predefined schedule. The event will only fire on the server that is currently the primary server.

Here is an example of a scheduled event to call the external procedure:

In this statement, the event parameter NumActive is used to ensure that an instance of synchronization is not already running. Synchronization is scheduled to occur every 10 minutes during business hours.

Corporations are going to continue to move towards always available data and occasionally connected applications. This will continue to increase the importance of enterprise database management systems to remain functional and online in 24/7 environments.

Database mirroring is an effective way to provide database availability and disaster-recovery for data synchronization environments. Failover of database mirroring environments is both fast and automatic, providing seamless, reliable service. Coupled with initiating synchronization from the remote database using the xp_cmdshell in a scheduled event will eliminate single points of failure in the mirrored architecture.

Joshua Savill is a Product Manager of data synchronization technologies for Sybase iAnywhere.