Preparing this book review, I felt a little like George
Costanza from Seinfeld. Remember that episode where George had to read the book
Breakfast at Tiffany’s for a book club he had joined. He went to great
pains to find and watch the movie because he was too lazy to read the book.

This book sat on my desk for weeks and I just couldn’t seem
to open it. Once I finally did, I still had to force myself to keep going.
Not that the book was poorly written but because I was just feeling lazy. Then
I remembered that the DVD that comes with the book includes video tutorials for
each chapter. Soon, I was comfortably viewing my way to a good understanding
of SSIS. 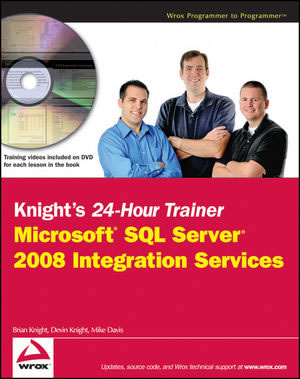 This Wrox book sports the typical tech-book price of $49.99
but in my opinion, it’s completely worth it. In fact, I’m not the only one who
thinks so. The reviews on Amazon are all glowing, not one of them giving it
less than 4 stars. Also, I was first attracted to this title because it was
said the book was a favorite of those attending the PASS Conference. Having
read the book and watched the tutorials, I understand why.

By now, you’ve probably ascertained that I liked the
tutorials, but you needn’t simply take my word for it. One of them, chapter
45, is posted on YouTube so you can view it for yourself. It’s the lesson on running
packages and serves as a good representative sample of what to expect.

There is, in fact, a video for every chapter in the book. Here’s
what I like about the tutorials:

That last point will probably need some explanation. It goes
without saying that writing is a vastly different medium than speaking but
exactly how it’s different is not so obvious. When we speak, we spontaneously
emphasize things as we think of them. It’s difficult to write that way and
editors like to revise such rambling and disjointed text. When speaking,
however, one can get away with a lot of spontaneous interjection, and that’s
exactly what happens on the videos.

For example, while demonstrating how to create a Send Mail
Task, the narrator casually mentions that one can check on the progress of the
task by clicking the Progress tab. Duh! But I never even noticed it there. I
mean, most tutorial tasks run so quickly their incremental progress doesn’t
matter. In this case, however, the mail server couldn’t be found so the task
was waiting for a time-out, which gave me an opportunity to watch “the
progress” of the task. 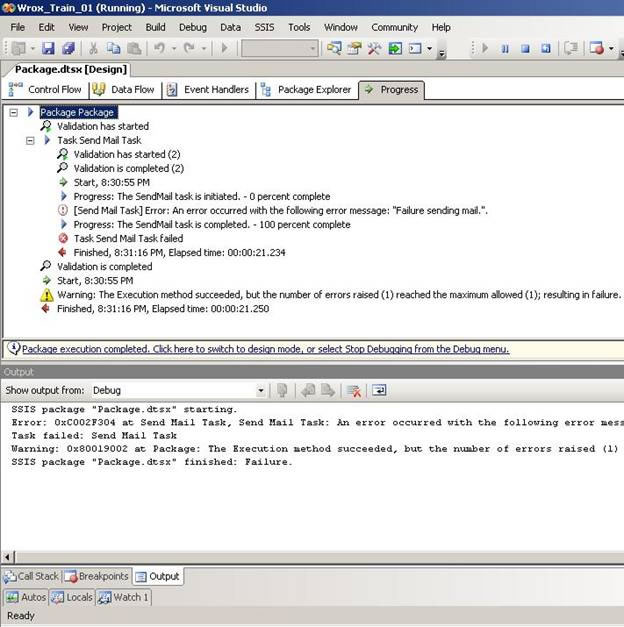 There were other numerous little things the authors
interjected, probably without even realizing it, that were valuable in my
understanding of how to work in the BIDS development environment.

This concept also applies to things that were not omitted
from the chapter but which simply blew by me when I read it, or were not
clear. An example of that is the use of the Union All task, which the Authors
use as a generic receptacle into which to execute tasks. Below is a screen
shot of how this package appeared in my SSIS environment. I mean, it’s clear WHAT
one needs to do but not entirely clear WHY one would do this. In the tutorial,
the authors had an opportunity to amplify the reasoning for using this control. 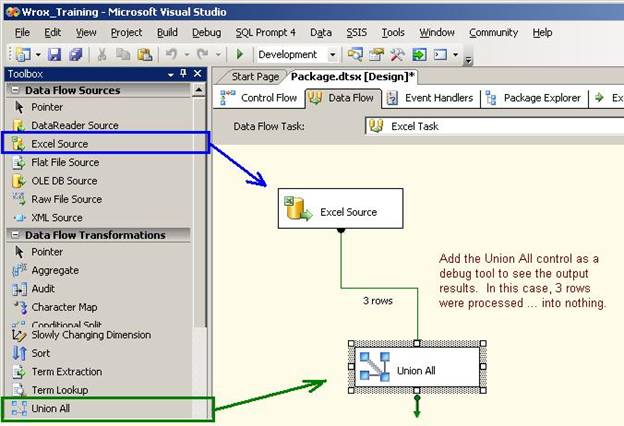 I loved this book and I loved getting up to speed with
SSIS. In retrospect, I feel stupid for putting it off. I highly recommend
this book for anyone wanting to get started with SQL Server Integration
Services.

Years ago, I cut my development teeth on Microsoft Access
and VBA code and frankly, that’s what I have traditionally used to perform
tasks that are simple in SSIS. I once built a VBA application to locate a SQL
Server backup file, zip it and ftp it off-site. It took a bit of code and a
couple library references to do something easily accomplished in SSIS. Thanks
to the Knight’s 24-Hour Trainer for SSIS I now have a much easier way to
accomplish this and many other data management tasks and they make learning it
a real pleasure.

Danny Lesandrini
Danny J. Lesandrini currently works as the IT Director for Pharmatech Oncology Inc. at http://www.pharmatechoncology.com/. He holds Microsoft Certifications in Access, Visual Basic and SQL Server and has been programming with Microsoft development tools since 1995.
Previous articleThe Office of the Auditor General of Alberta Selects AppDetectivePro for Database Audit and Assessment
Next articleFree Sync Framework Power Pack download for SQL Azure