Getting Started with R Services in SQL Server 2016 – Part 2

Advance Analytics is becoming the norm now. Every organization wants to use the power of advanced analytics to predict future outcomes and take proactive corrective measures to remain competitive and win over its competitors. Therefore, it’s now becoming necessary for every organization to exploit the data that they have (or in some cases external data as well) and predict future outcomes to remain competitive by offering their customers what they want, when they want, and where they want. Looking at this potential, SQL Server 2016 brings native support for doing advanced analytics in the database itself using R Services, without moving data across.

In my last article of the series, I talked about what R is, what on-premise advance analytics options from Microsoft are and how to get started using R Services with SQL Server 2016. In this article, we will look into a detailed conceptual execution flow, executing R scripts from SQL Server Management Studio and other R client tools.

How the Execution Flows Conceptually

There are multiple ways that data scientists can write and execute R scripts for developing and building predictive models. Based on preference, they can use any R client tools. When a data scientist uses an R client tool on their local machine, he/she has options to either bring the data to the client workstation for local analysis or use the RevoScaleR APIs to push computations to the SQL Server computer, avoiding costly and insecure data movement across network. RevoScaleR APIs have been optimized to analyze data sets that are too big to fit in memory and to perform computations distributed over several cores or processors (unlike local workstations, this is often the case with server machines, where you have huge memory and multi-core processors). It also supports working with subsets of data for greater scalability. That means most RevoScaleR APIs can operate on smaller chunks of data, and use updating algorithms technic to aggregate intermediate results into the final result. This means your predictive solutions, based on the RevoScaleR APIs, will work with very large datasets and are not bound by the local memory of the workstation.

When SQL Server receives a request to execute R-script, it treats it as an external script and with the support of SQL Server Trusted Launchpad, SQL Server 2016 executes external scripts by external components (in the case of R-script, its R Interpreter). When SQL Server receives an R-scrip for execution, it launches the Advanced Analytics Extensions Launchpad process that enables integration with Microsoft R Open using standard T-SQL statements. Then the R-script is handed over to R Interpreter for execution and the result is returned to the client.

This allows data scientists to explore data and build predictive models from their workstation, keep doing iterations for testing and tuning until a good predictive model is achieved, and SQL Server manages execution of the R-scripts, resources needed for execution, and security.

SQL Server manages execution of the R-scripts, resources needed for execution, and security

After the R-script and model are finalized and ready (once ascertained that it is performing well as per expectation) they can be deployed into production (trained models are stored in binary form, in a single column of type varbinary(max) of the SQL Server table).

Embed the R-script or model in stored procedures

SQL Server 2016 brings a new system stored procedure (sp_execute_external_script) to execute scripts written in a supported external language (at this time R is the only supported language) by external runtime from the database engine itself. These are some of the important parameters for this stored procedure; you can get an extensive list here. Before you can start using this stored procedure, you must first enable external scripts execution feature as discussed in my last article.

The example below passes a dataset or result-set from SQL Server to R-scripts, then inside the R-script execution, summary statistics are being calculated. Next, to return it back to the SQL Server, the output is converted to a data frame. Finally, the result is shown using the WITH RESULT SETS clause. In the earlier example, we used the @input_data_1 parameter to specify a query to pass a dataset from SQL Server to R-script. By default, this dataset is referred as InputDataSet although you can change the name of this dataset with the @input_data_1_name parameter as shown below. In that case, whatever you specify with the @input_data_1_name parameter, you need to use the same value to refer to the dataset or data-frame inside R-script as shown below. Also, this script shows how you can refer to a variable\column from a data-frame to calculate quantiles using the quantile function in R instead of using all the variables\columns from the data-frame as in the last example for summary statistics. 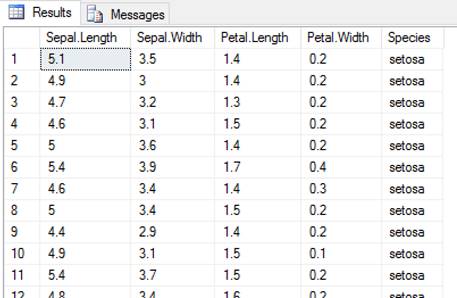 Passing a sample iris dataset from R to SQL Server

Please note, its recommended to use R client tools during development as they provide more developer productivity features like IntelliSense, debugging, proper runtime execution message reporting, etc. Once you have finalized your model, you can save the finalized trained model in SQL Server and then use a T-SQL stored procedure for scoring on the new data or observations.

There are a few additional steps required if you need to access SQL Server data, or run R commands from a remote data science workstation. “Set up SQL Server R Services (In-Database)” has details on those steps.

Once you have installed R Tools for Visual Studio, you will be able to see the R Tools menu in the bar as shown below: Before you begin, you first need to create a project based on R, which allows you to organize your code along with other features as mentioned above. Create a project based on R As a data scientist, it doesn’t matter which R client tool you started with, you can switch from one tool to other by just moving the code as is; no changes are required. For example, in the earlier section on using R Tools for Visual Studio, we created a histogram based on data from SQL Server, the same script can be taken to R Studio and can be executed as is, as shown below.

In the script below, first I set the library path to point to the folder where RevoScaleR package is available and then I load that package with the library function. Finally, I call rxHistogram API and pass a formula and data source to generate the histogram for that.

SQL Server 2016 brings native support to doing advance analytics in the database itself using R Services. In this article, we looked into the details of conceptual execution flow, executing R scripts from SQL Server Management Studio and other R client tools.

Getting Started with R Services in SQL Server 2016 – Part 1

Arshad Ali
Arshad Ali works with Microsoft India R&D Pvt Ltd. He has 8+ years of experience, mostly on Microsoft Technologies. Most recently, as a SQL Developer and BI Developer he has been working on a Data Warehousing project. Arshad is an MCSD, MCITP: Business Intelligence, MCITP: Database Developer 2008 and MCITP: Database Administrator 2008 certified and has presented at several technical events including SQL-School. On an educational front, he has an MCA (Master in Computer Applications) and MBA-IT. Disclaimer : I work for Microsoft and help people and businesses make better use of technology to realize their full potential. The opinions mentioned herein are solely mine and do not reflect those of my current employer or previous employers.
Previous articleOracle’s Automatic Listener Registration
Next articleUsing A Block Predicate to Restrict Row Updates and Inserts