As developers, we have always wanted to have a single Integrated Development Environment (IDE) for not only writing application code but to also to write database code in a single place without switching the environments. SQL Server Data Tool (SSDT) is a new feature in SQL Server 2012 that provides this capability primarily intended for developers and lets developers write their application as well as database code in a single development environment of Visual Studio.

SQL Server Data Tool (SSDT) is a new feature in SQL Server 2012 and a free web platform installer, which can be installed from here for Visual Studio 2010 and from here for Visual Studio 2012. Once having installed SQL Server Data Tool, a developer no longer needs to have SQL Server Management Studio (SSMS), which is primarily intended for managing SQL Server and database instances, for database development and design activities. SSDT provides writing database code in both connected (either on or off-premise) as well as in disconnected mode and the best part is the experience is seamless while working in either any of these modes. SSDT provides the ability to the database developer to build, debug, maintain and refactor database objects in a simple and interactive way.

SSDT provides the capability to use Visual Studio IDE itself for database design, development, debugging and testing for developers with limited or no access to a live (production) database. Developers can create a SQL Server Database Project in the SSDT and without being connected to any live SQL Server instance they can design and develop their database code. SSDT includes a visual Table Designer for creating and editing tables in either database projects or connected SQL Server instances. Right within the IDE, you can use version control for all of the files if you are working in a team-based environment. Once you are done with your database development, you can publish your project to all of the supported SQL platforms, including SQL Azure. 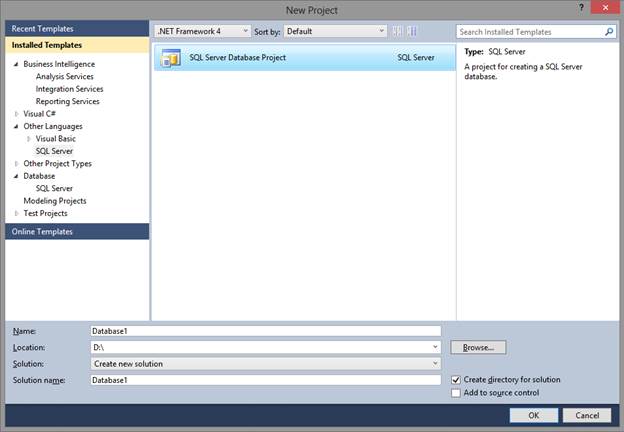 Even though you work in disconnected mode, the SSDT provides all of the features like tools to edit, compile, refactor, Intellisense, Schema Comparison, creating snapshot the database project, etc.

There are different options available to create a SQL Server database project as mentioned below:

Arshad Ali
Arshad Ali works with Microsoft India R&D Pvt Ltd. He has 8+ years of experience, mostly on Microsoft Technologies. Most recently, as a SQL Developer and BI Developer he has been working on a Data Warehousing project. Arshad is an MCSD, MCITP: Business Intelligence, MCITP: Database Developer 2008 and MCITP: Database Administrator 2008 certified and has presented at several technical events including SQL-School. On an educational front, he has an MCA (Master in Computer Applications) and MBA-IT. Disclaimer : I work for Microsoft and help people and businesses make better use of technology to realize their full potential. The opinions mentioned herein are solely mine and do not reflect those of my current employer or previous employers.
Previous articleOracle Database 12c Gears Up for the Cloud
Next articleMicrosoft Releases SQL Server 2014 Preview